For the last two years, I’ve helped put on !!Con (pronounced “bang bang con”), the radically inclusive conference about the joy, excitement, and surprise of programming. We’re proud of what we’ve done with !!Con so far, but there’s a lot we can and must improve on. One of the ways we can improve is with the help of volunteers.

One thing that we do at !!Con is real-time captioning of talks. At our first conference in 2014, our captioner was the amazing Mirabai Knight, and this year, our captioner was the inimitable Stan Sakai. Both of them did terrific work at the conferences! But one of the cool things about live captioning is that it provides more than just an experience to be had in real time — it also results in a high-fidelity document of the event being captioned. We have transcripts of all our talks from 2014 and 2015.

What can be done with a text transcript? Lots of things. Since they’re much more easily searchable than video or audio recordings, you can quickly find that talk you’re trying to find and can only remember a couple of phrases from. You can use machine translation tools to translate the talk into your native language or someone else’s. And, if you also have a video of the talk, you can sync up the captions with the video to make the recording more accessible and useful to everyone.

In fact, we do have videos of almost all of the !!Con 2014 talks.1 But, despite having both the videos and the transcripts handy, we’ve never taken the time to actually caption our own videos using our own transcripts. People who’ve wanted a captioned !!Con video have had to use YouTube’s auto-captioning. Even in the best of cases — when a speaker speaks loudly, enunciates clearly, and doesn’t have an accent that the voice recognition can’t understand — auto-captioning still turns “do what Tcl does” into “do what Apple does”, which, while hilarious, is not so great for people trying to actually understand a talk. Honestly, given that we claim to care about accessibility, it’s embarrassing that we’ve let auto-captioning be the only captioning available on our videos for so long.

The good news, though, is that tools exist for quickly and easily adding existing captions to videos. Recently, one of our 2015 speakers, Ashley Blewer, used the Amara subtitle editor to add our captions to Camille Fournier’s keynote talk from !!Con 2014. I hadn’t heard of Amara until recently, but it turns out to be a handy in-browser tool that makes it straightforward to import existing caption text and then sync it up with a video. 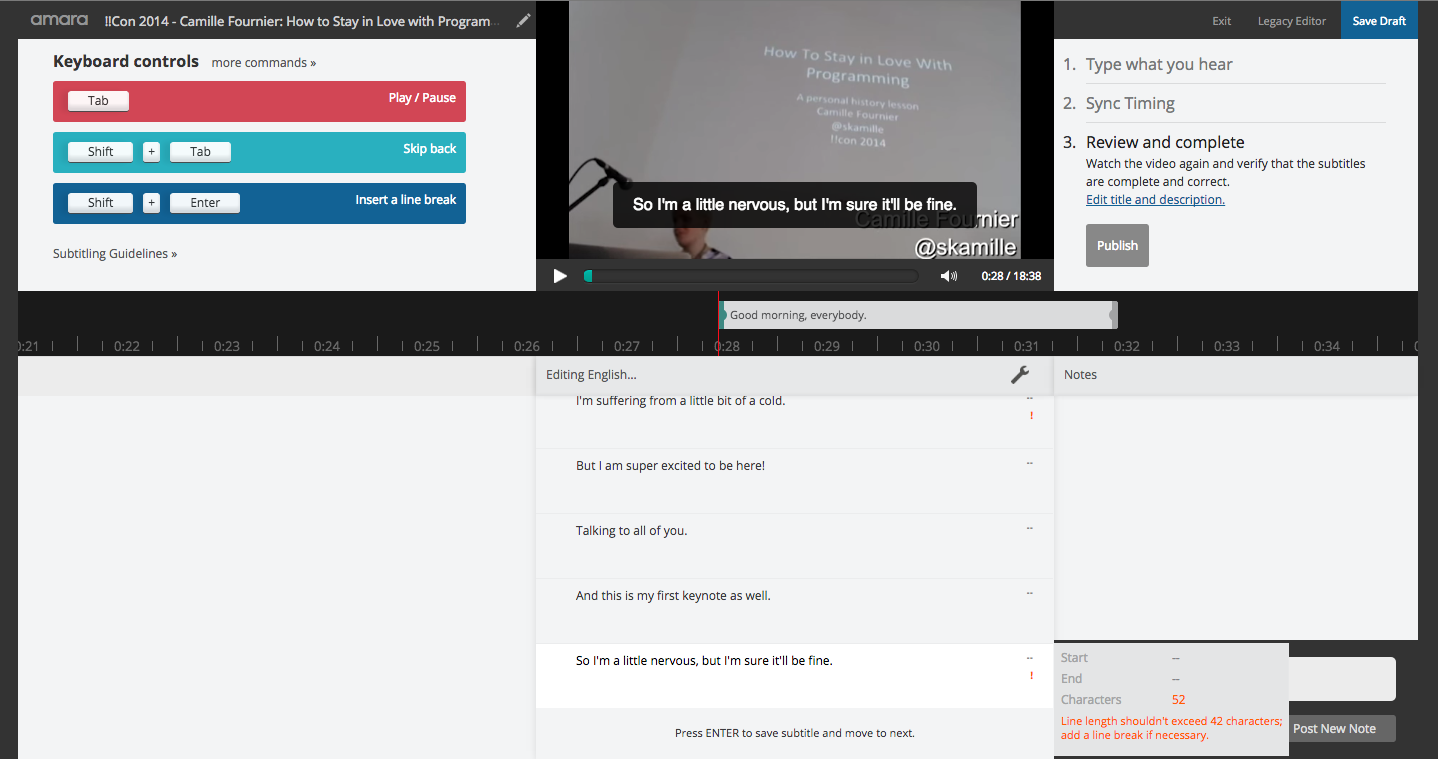 The best part is that captions added to a video in Amara can sync to YouTube, and we’ve set up our !!Con YouTube channel to allow this — so now, the correct captions appear in the YouTube video of Camille’s talk! It’s a huge improvement over auto-captioning, and you can help do it, too. Ashley has even written a handy guide that explains the process. The first step is to sign into Amara and click “Subtitle Video”. You’ll be prompted for a video URL, which will launch the Amara subtitle editor, and then you can paste in captions from the appropriate text file. Finally, all you need to do is sync the captions to the video, which, as Ashley points out, is actually pretty fun:

First, it’s fun because you get to watch the talk! Second, it’s fun because you press the “down” button to move to a new subtitle and you get in a rhythm that is both videogame-esque and meditation-esque. […] This is a GREAT way to feel super-productive even if you are feeling too under-the-weather to do other work.

!!Con talks are only ten minutes long, so it’s not a huge commitment to do one talk, and there’s even a spreadsheet where you can claim the talk that you want to work on so as not to collide with someone else. Ashley’s already claimed two more, and I’m hoping that more people will see how fun and easy it is to caption talks and come help out. Especially if you want to hear about continuations or strace or awk or Coq or any of the other wonderful topics that we had talks on at !!Con 2014, there’s no reason not to sync captions while you watch.

So, go forth and caption some talks!